Nelsworth, England – 3pm on Saturday, August 20, was football time in Nelsworth, as the small western English town watched its team play in the major leagues for the first time in its 133-year history.

The match, a game at New Lawn Stadium, put Forest Green Rovers against Plymouth Argyle. For the first time, Rovers were moving up the ladder to the English Football League, in a merit-based system that assigns teams to higher or lower leagues based on last season’s record. (League One is the third highest ranked in English football.)

As the Rovers tried to hit their weight even more against Argyle, they kept their eyes on the real prize for a day – all the way to the next level, the English Football League Championship.

Shrugging shoulders with much bigger clubs might be intimidating for a club like Rovers, but they do things differently: even the road to their humble stadium is called “another way”.

The Rovers, widely known as the “Green Club”, were the first professional sports team in the world to be certified as carbon-neutral by the United Nations. They do not serve any meat or dairy products in their concession stands – although fans can bring their own. The club also follows and promotes environmentally friendly policies.

The Green Club plays in name as well as in nature, some of its games are sponsored by the Sea Shepherd Conservation Society—a marine conservation nonprofit whose tactics have sparked controversy—and hoists the organization’s black Jolly Roger flag over the manicured lawn. It may come as no surprise that onlookers often hear chants of “You dirty vegan bastards” and “Where did your burger go?” From the opposing fans. 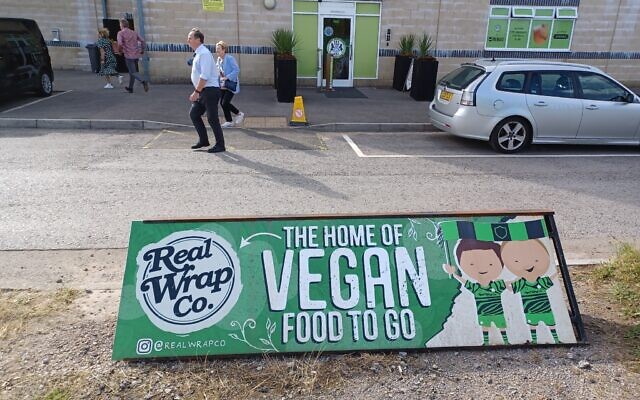 But another standard is flying high – the Palestinian flag. The charismatic club owner, Del Vince, vigorously promotes Palestinian issues and challenges the age-old principle of not mixing politics with sport.

Vince is a former businessman and owner of a green energy company who used to roam the hills of Gloucestershire. He bought the club in 2010 and financed his most successful era. Flags, no greasy burger trucks near the stadium, Sea Shepherd T-shirts and vegan food labels are all part of his vision. Likewise, the potentially controversial policy.

In April of this year, he posted a picture of the Palestinian flag with the caption: “We raised this flag at FGR’s [Forest Green Rovers] Today’s game. In solidarity with Palestine. The conflict there has the same components as the conflict in Ukraine – invasion, occupation, killing of civilians, destruction of homes and hospitals – and siege… Palestine has been under Israeli siege – air, land and sea, for decades. The United States allows it, pumps billions into Israel to support its economy and army and uses its veto to prevent any meaningful action by the United Nations.”

On April 30, Vince also hosted Husam Zomlot, the representative of the Palestine Liberation Organization in Great Britain, and in 2019 he welcomed Jeremy Corbyn – the former leader of the Labor Party known for his strong support of the Palestinians – onto the field. It did not go unnoticed. 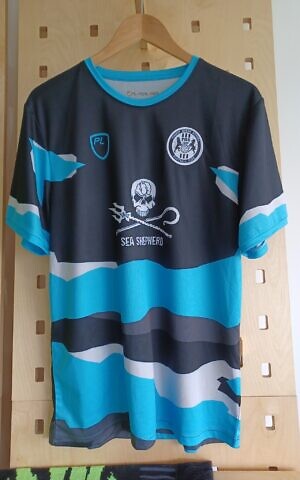 On May 25, a group called UK Lawyers For Israel (UKLFI) sent Vince a letter highlighting their objection to his actions.

“Mr. Vince and the FGRFC have clearly used sporting events for demonstrations of a non-sporting nature and are in clear and flagrant violation of these provisions,” said Sam Green, Director of UKLFI.

The free-right Israel Hayom published an article this month accusing Vince of anti-Semitism. The article reached the height of hysteria with the claim, “For Jewish football fans, it is better that they do not attend these matches, especially if they wear anything that identifies them as such.”

Last weekend, The Times of Israel decided to investigate and make the trip from London to Nelsworth – located in the Cotswolds – for the historic August 20 match.

‘I have no problem with the existence of Israel’

Despite being unequivocally Israeli, upon arrival in Nelsworth, this reporter received a warm welcome from everyone – from the press office to fans, as well as Vince himself.

Vince spoke to The Times of Israel before the match, wearing a camouflage shirt and pants. He immediately admitted that he saw no reason not to mix politics with sports. “Why do I draw a line?” Asked. 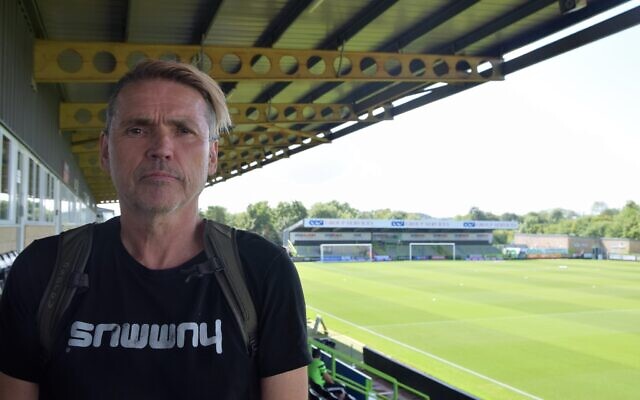 Echoing Ted Lasso’s favorite, he said, “Football is life. It’s about people coming together, doing things in common. Why exclude things from that moment and time? If you look at football, it stands against racism, sexism and homophobia.” Nationality. Football is already taking a stand on the big issues.”

Vince said that even a club was calling explosive right-wing British politician and Brexit supporter Nigel Farage, “that would be their business”.

“I wouldn’t say they can’t,” he said, “and that’s a violation of the rules.” “We all have to do the things we believe in. Farage has got supporters and people who believe in the things he represents, and so do we.”

Vince said he received a “long letter” from UKLFI in May accusing him of racism and discrimination.

“I said that criticizing the State of Israel is by no means anti-Semitic,” he said. “I criticize Britain, I criticize the United States, I criticize anyone I think is doing something wrong.” 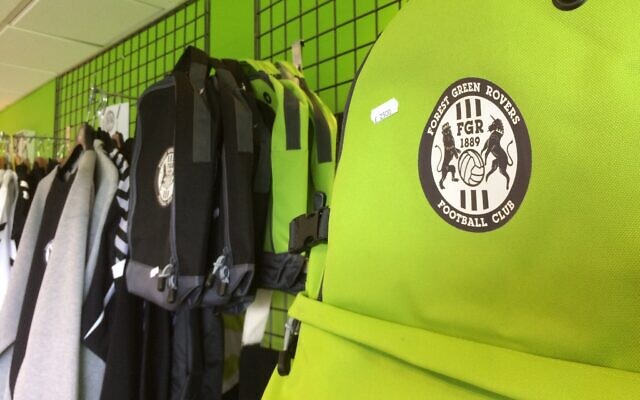 In this July 30, 2018, photo, merchandise is for sale at The New Lawn, the football stadium of Forest Green Rovers, in Nailsworth, England. (AP Photo/James Brook)

But Vince has been clear that he does not support a boycott of the Jewish state’s soccer clubs.

“We will not boycott any Israeli football team, because they are not responsible for the state,” he said. I have no problem with the existence of Israel. not at all. It is simply a criticism of the State of Israel for its occupation of what should be the State of Palestine.”

Nothing is more important to me than standing up for what you believe in, no matter what.

However, when asked about his support for Corbyn, whose tenure has been marred by accusations of systemic anti-Semitism within the party and which has alienated many Labor supporters with his extremist tactics, Vince doubled down on his stance.

“It was during the 2019 election,” Vince said of calling Corbyn out on the field. He was the leader of the Labor Party. I wanted them to win it because of their stance on green issues. For me, this is the most important thing. So, we may have non-Labour voters, and even some Labor voters who didn’t like Corbyn, but what can you do? “

“Nothing is more important to me than standing up for what you believe in, no matter what,” he said. I am not interested in commercial or political implications. We also do this on climate issues. Instead of announcing the things you should buy, we advertise what happens when you buy things – the deterioration of the planet. We are not here to escape.”

“I just came for football”

Outside the match at Nelsworth, the atmosphere was heating up. Of the 3,400 fans who attended, half were Argyle fans. To complicate matters – or simplify it, depending on how one looks at it – the entire fan base cheered “Green Army” for both teams. While visitors played in dark green, rovers wore phosphorescent, squiggly green in your face with black zebra stripes. Vince is not known for his skill. 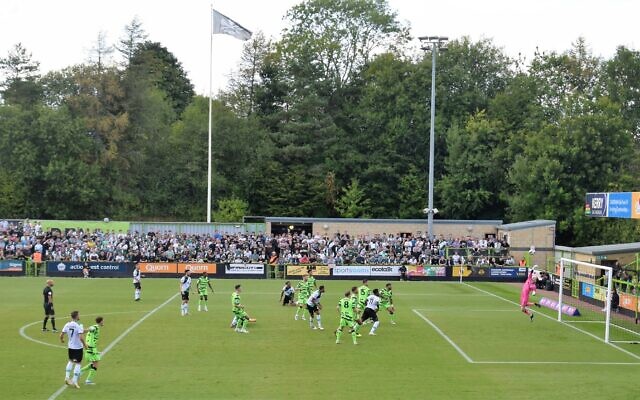 In the stands, two fans named John and Clive, both retired locals who have supported Rovers for over 25 years, sat together near this reporter.

“It’s great to play here in such a place, in such a beautiful landscape – although I wouldn’t say that in January,” John said.

“I am grateful to Dale for taking over the patrols and have no problem with his green issues, but the rest,” he said, referring to the Palestinian flag contemptuously, “is not of my taste.”

I don’t know enough about the Palestinian issue, but I don’t want to deal with it here on the field

“I don’t know enough about the Palestinian issue, but I don’t want to deal with it here on the field,” John said. “I hate it when I say I’m a Rovers fan and it comes with assumptions. Guilty unanimously. Or when Corbyn came on the pitch. I’m here for the club and football, and I would object to any politician, including Boris Johnson, being presented as such.” .

From the heads flashing around us, it seems as if he speaks on behalf of the many, not just the few.

Shay Yazdi lives in Rosh Ha’ayin, central Israel, and is a supporter of the Israeli Rovers. Even though he’s never been to a game, he’s always hoped that he’ll one day – until recently.

“I became a fan because of the vegetarian agenda and started watching every match from Israel and connecting with other fans,” Yazdi said. “But because of recent events, I don’t feel like I’ll be welcome there.” 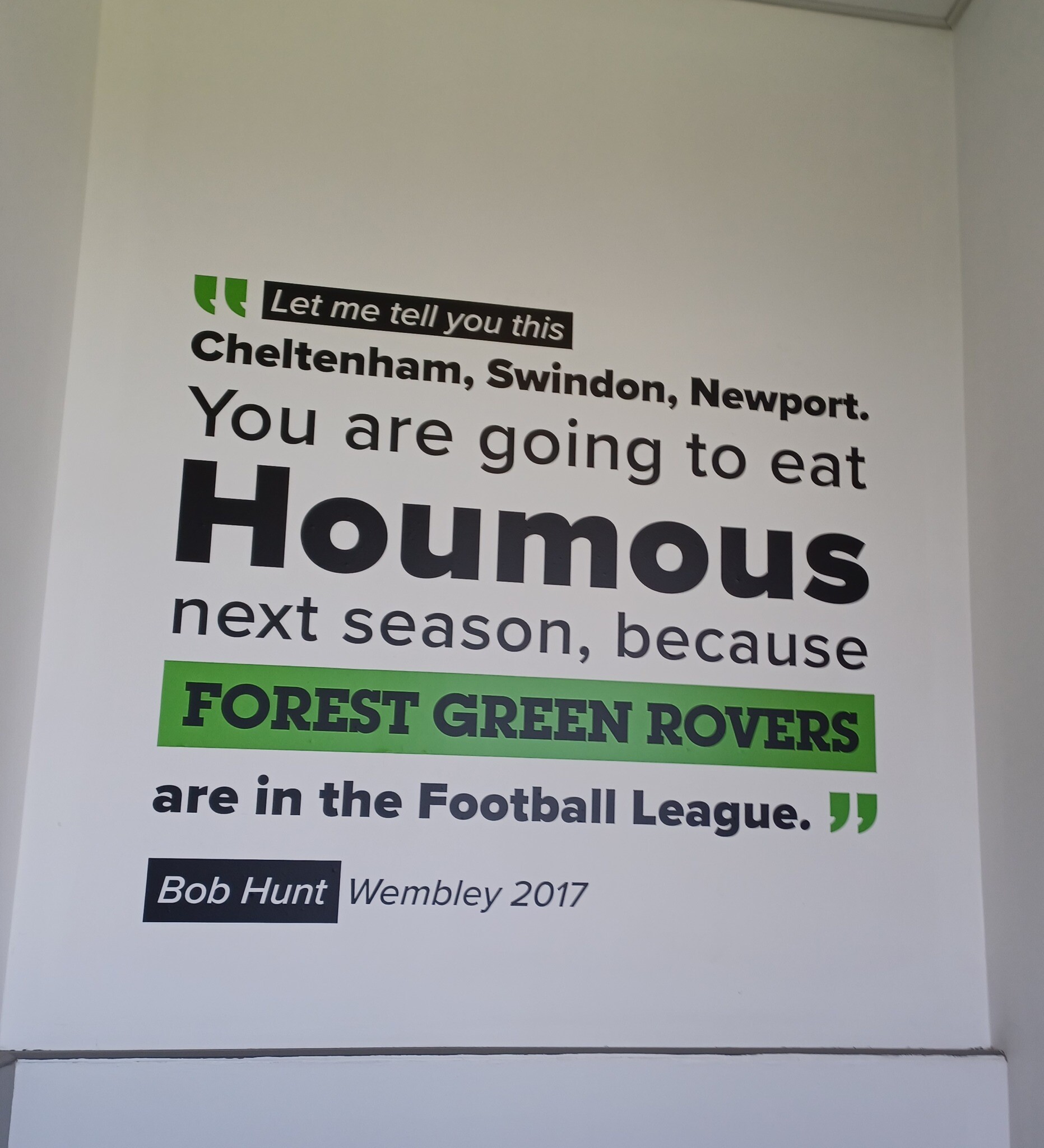 A sign warns opposing teams that they will eat Hummus next season after raising the level of Forest Green Rovers. (Shaul Adar)

Yazdi got into a bad altercation on Twitter with Vince over the issue of Israel which received mixed reactions from his fellow fans. While some Rover fans were happy about the brawl and took the side of Vince, others who identified as supporting the team prior to Vince’s tenure sent Yazdi private messages saying they did not agree with his views.

“Dell is a very influential figure in the FGR community and people listen to what he has to say,” Yazdi said. It is clear that he does not understand the Israeli-Palestinian issue and only wants to provoke. He is using the club to achieve his political aspirations, and that bothers me on a personal level.”

The UKLFI group of lawyers sent a letter of complaint to the Football Association asking them to intervene, but they received no response. Looking at the team’s fan forum and Vince’s Twitter feed, one can see that the effort has only fanned the flames – the duel of Palestine against Israel has appeared more and more prominently online.

For the Israelis, FGR appears to be taking a page out of the Betar Jerusalem soccer team’s playbook. The controversial team has grabbed headlines in Israeli newspapers due to rampant anti-Arab racism among fans, and is paying the financial price for what appears to be extremism.

But on the field last week, Forest Green Rovers opened the game brilliantly and were close to scoring, but two devastating attacks from Argyle put the visitors 2-0 ahead at the end of the first half. The second half followed the same pattern. Rovers caught the ball but were toothless, and were punished again.

The match ended with the team losing 3-0. A few people shouted, “You don’t know what you’re doing,” toward the Rovers’ manager. It’s going to be a long season, and not just off the field.